Hi all I'm quiet cos I fractured my dominant hand this week. Frustrating painful and boring!

Anyone written a story on this theme? 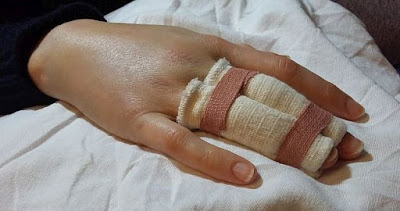 Posted by scribbleandedit.blogspot.co.uk at 15:28 8 Comments 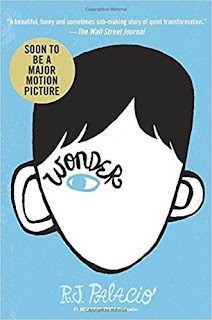 I saw the trailer for the film 'Wonder' the other day and discovered it was a childrens' book by R.J. Palacio.

I then saw an interview with the author where she explained what prompted her to write the story.

Then, I just had to read it for myself.

WOW! If you have already read it you'll know that it's fabulously written, sensitive, funny, sad, uplifting and thought-provoking. I just loved it.

Posted by scribbleandedit.blogspot.co.uk at 15:58 6 Comments

Meg looked up from her crossword. ‘Place of privacy (7)’ she puzzled, looking out through her tiny window, at row upon rows of glistening rooftops beyond, burnished by sunshine’s cameo. She longed to be able to see grass and trees and to hear bird song. A holiday was not possible for another few months, yet.
A sigh juxtaposed the notion that an impatient slice of chocolate cake, purchased during this morning’s shop, was awaiting her in the kitchen. Yet it was still too early for afternoon tea.
An absent-minded pencil circled her lips before diving into her mouth for comfort.  Delayed gratification, was what the psychologists termed it, which inferred that to enjoy the simple pleasures, offered by life, was somehow sordid and insalubrious.
She sucked; only peripherally aware that the pencil was leaden not sweet. Since the slice of cake and not the crossword clue had claimed her attention; Meg decided to venture into the kitchen and just check that the cat had not, in any way, damaged or disturbed the desired confection, before she had a chance to enjoy it.
The brown, paper bag, with crisply folded edge, sat in the exact spot on the counter, where she had checked it half an hour before. Its dreamy, velvety deliciousness shielded from temptation. The clock ticked a scornful second past two o’clock, reminding her that she had yet to find all the answers to her crossword puzzle. Meg closed her eyes and reasoned that if she did not look at the paper bag and spent the time washing dishes, feeding the cat and sweeping the kitchen floor, she might just last out until four o’clock.
She busied herself, but there was only one mug in the sink, from that welcome cup of tea at lunchtime. Her ginger tom, Curry, had not yet returned from his meander around the neighbourhood and the small, lino floor was already spotless.
Meg felt bereft as she refolded the tea towel on the radiator and popped a fresh tea bag inside her cup. There was nothing for it, but to lay the tea tray, in preparation. She found a small, dessert plate with a fancy floral pattern that matched her china mug and smiled, imagining the chocolate icing, sliding indulgently over her taste buds.
The brown paper bag, however, seemed bulkier than she had remembered. A horrified pang drove into her musings, as it lifted heavily into her hands and she feared that the silly girl behind the counter had mistakenly given her a piece of Chelsea Bun or Lardy Cake, instead. Currants in bread with sugar did not quite match up to the extravagant piece of confection she had spied through the glass display.
Opening the bag, Meg felt her tight-lipped trepidation split into a wide smile, as she found not one slice of cake within, but two.
The answer to her puzzle came in tandem. She would have a slice now with a hot brew and re-treat herself this evening after supper.
Posted by scribbleandedit.blogspot.co.uk at 12:10 7 Comments


Lovely weather, but we are so unused to this heat that it is hard to do much. However, I managed to keep cooler last night, which was a God send.

MadKane set this 'hum' Limerick challenge some time ago. I wrote this and promptly lost it, so now I've found it I'm adding it today.

Those with a tendency to hum
Really should be consulting their mum
Since etiquette dictates,
That when searching for mates,
It is best to avoid smelling rum.

Posted by scribbleandedit.blogspot.co.uk at 16:19 4 Comments