I started reading A Surfeit of Aunts by Daphne Coyne, 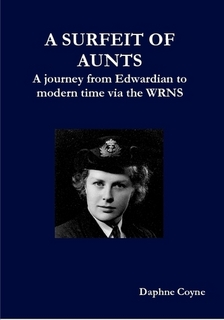 It's available at www.Lulu.com
and the write up states:
"This book concerns life in the twenty-five years before and during the second world war. Born in 1922, my first ten years were very happy years. Things changed with the sudden death of my father. Because he was a vicar, the family had to leave the vicarage in six weeks with no home to go to and very little money. To help my mother, her three widowed sisters (the aunts) came on the scene. The only security, away from this merry-go-round of our family life, was in boarding school and then the services. My brother in the Army and I in the WRNS. I was a plotter and worked in operations rooms at several naval bases. The last one was shortly before the invasion began. I was sent to Fort Southwick, near Portsmouth. I worked here, in the underground, steel lined, plotting room of ‘combined headquarters’ as ‘Operation Overlord’ unfolded in miniature on the plotting table in front of me. When the invasion was safely under way, I was posted to ‘tactical anti-submarine training’ in Scotland."

So far I am loving it! Though I confess I shed a tear or two over the description of her father's death.

Also do you remember my Novel Films Blog fest?

Well, I'm also reading
The Firm by John Grisham having seen the film a number of times. It's great seeing the similarities and differences.