"What If?" Fairytale Madness Blogfest 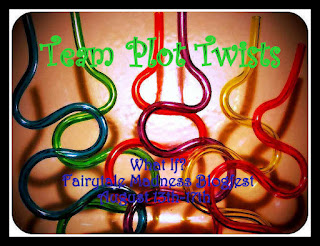 This fun Blogfest is running from 15th - 17th Aug to Friday this week. Our mission, if we chose to accept it, was to pick a classic fairytale and tweak it by altering "one detail, one event, one character trait, one thought". There are four categories: Plot Twists, Love Stories, Comic Relief and Tragedy. Participants are to think of a well known fairytale and ask "what if…" From there, they must write a 300 word (max) Flash Fiction illustrating this new detail of the fairytale that changes everything.

Cinders Fella by Madeleine Maddocks
Cinderella’s stepmother, whom she referred to as the witch, together with her two obnoxious step-sisters, had left her doing laundry when the Prince’s Valet arrived with the glass slipper. She had followed at a safe distance, watching as the three women heaved themselves into the ample chairs like three lumpy mattresses. Cinderella saw them take off their shoes in preparation for trying on the glass slipper, knowing for certain, that there was no way any of them could fit into that delicate item of footwear.
When the Valet bent down to fit the shoe to her stepmother’s large, gnarly feet, he bobbed up again quickly, taking out his ‘kerchief and blowing his nose.
“It must be a slight fit of the snuffles, Madam.” He said, his eyes watering as he held the kerchief firmly to his nose. He shook his head. “I’m afraid Madam, it doesn’t fit you”.
He cast his eyes over the sisters’ feet, with a grim expression. Trying the slipper against Edwina’s foot, the Valet shook his head again. Cinderella knew that, if she had been able, her stepmother would have done anything in her power to secure the Prince’s hand-in-marriage for one of her own repulsive daughters. She smirked, imagining how the witch would react when she claimed the glass slipper herself and married her beloved Prince.
A loud sneeze momentarily drew everyone’s attention away from the slipper.
“It must be catching” her stepmother snuffled, winking at her eldest daughter, Perpetua.
Cinderella’s smile died on her face as the awful truth hit her. The glass slipper had transformed in size, so that it now fitted her eldest step-sister’s foot, perfectly.
The Valet’s features quickly changed from horrified to blank subservience.
“Lady Perpetua” he bowed. “The Prince will be delighted that we have finally found his betrothed.”
(300 words)

Could this have a tragic ending... Can Cinders win back her Prince before his wedding to evil step sister, Perpetua?

Sorry everyone my Genre Blogfest entry posted up too early, so I have rescheduled it for 17th Sept. Thanks to those who commented.
Posted by scribbleandedit.blogspot.co.uk at 16:43