Review of Bed by David Whitehouse:


A friend gave me her copy of this book. Thank you Sarah
She said "I think you'll like it"
I replied "Oh, okay, what's it like?"
She stared pensively into the middle distance and then said "Odd!"

Bed very quickly hooks you in as David Whitehouse's use of language is like the best chocolate you've ever tasted. It's absolutely divine. If you want to know how to 'show not tell' in creative writing then read this novel. It's an absolute masterpiece of literary fiction! The descriptions are so poignant that you can see, hear, feel and smell everything with the characters.The story explores dysfunctional families within the whole cast of characters, those in the immediate family and those whose lives touch it. Some of whom only seem to appear on the sidelines because they cannot interact /express themselves normally, even with those they love. Narrated by a young man, who is never mentioned by name because like all the other family members he is completely overshadowed by the indomitable personality of his older brother, the story shows how the whole family are known as Mal's brother/mum/dad and not seen as people in their own right. This further emphasizes the immense personality of Malcom Ede. (I actually knew a family just like that!)
However, I do wish we’d known the younger brother’s name at the end of the novel, as some kind of coming of age catharsis for him, perhaps?
The thing that puzzled me, though, was the characterisation of the main character, Mal.
While he seems to wants to change things he apparently just chooses to give up and risk his own health. David Whitehouse explains the reasons later in the novel (which would spoil it for others who have yet to read it if they were listed here and for the author who has carefully crafted it so that the reason is an eagerly anticipated denouement) but as an abiding disciple of behavioural psychology I couldn't quite reconcile why such a self-possessed and determined young man would decide to act in such a way. I personally needed to know much more about Mal to make the conclusions satisfy.
Nevertheless, I adored David Whitehouse's writing and his skillful portrayal of a man with morbid obesity; something that is becoming all too common in today's society.

Guardian Synopsis 'As a boy, Malcolm Ede was charismatic and eccentric. He went out in the rain and took his clothes off in public. But on his 25th birthday he decides to take to his bed and stay there. Over the course of the next 20 years he swells, thanks to his devoted mother's near -constant feeding of him, to 100 stone – the fattest man in the world – and so traps himself and his family in a house that would need to be demolished in order to remove him.

Mal's father lives in the attic, building mysterious inventions in an attempt to atone for a mistake in his past. His mother, reduced to a short-order cook and nursemaid, lives in a trailer in the garden. There too, sometimes, lives Mal's old girlfriend Lou who, unable to let go, sleeps in a tent and waits to answer his fan mail.
All this is narrated by Mal's younger brother. For a lifetime he's been caught in Mal's charismatic, curly haired and rapidly widening shadow. He has tried to escape him but now, in his 40s and mysteriously injured with broken legs and a broken heart, he has returned home to sleep in the bed next to him'. 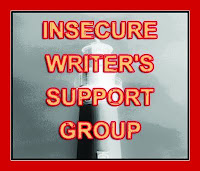 ISWG is hosted by Alex J Cavanaugh. Reading Bed made me re-evaluate my own WIP and reminded me that when I submitted the first page to a Blogfest last year, I received a comment that suggested I cut out lots of the description:

'While your descriptions are very vivid, you might try less of them in the same paragraph. I like the magic ones to take centre stage without being outdone by the next one waiting in the wings. When the ordinary surrounds the magnificent, it stands out far more'.

It made me realise that I want to write as descriptively as
David Whitehouse & Lori Lansens and so, once again, I must believe in my own writing and myself.

BTW check out this fabulous post on writing criticism by Jodi Hedlund
Posted by scribbleandedit.blogspot.co.uk at 07:30