I use word verification on posts to weed out the weirdo spam comments. Some that get through can often be quite disturbing.

While it is often humans who post the weird comments, word verification is supposed to show that the comment has been made by a human and not machine.

However, there are times when I imagine Commander Data (Android from Star Trek) would have a better job of deciphering Captcha than I, as with the example below. I imagine him saying:

"Captain it appears to me to be a simple configuration of shape, colour and letter form cleverly merged together to disguise each letter with visual texture and optical illusion.
The difficulty as I see it, Captain, is that most human eyes are not sufficiently evolved to cope with the contrasting stimuli." 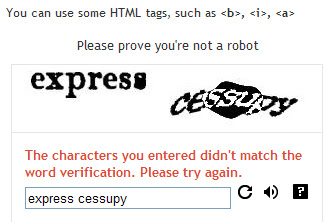 I can read the first word, but those words in the blurry black and white smudge often confound me!

I know many of you dislike word verification. What are your thoughts on the subject?

In other news. I shall be doing a Review of Rachel Morgan's first Creepy Hollow installment Guardian on 8th March. This will be followed by an author interview a few days later, so do come along and join in the fun.
Posted by scribbleandedit.blogspot.co.uk at 13:09