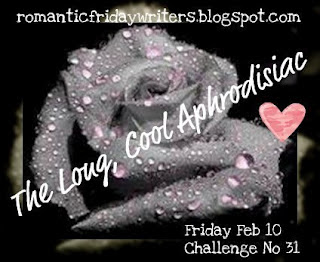 This Romantic Friday Writers Challenge theme is The Long, Cool Aphrodisiac:
Not all love potions take immediate effect. Some take a little longer to work through your system, but it's a great feeling...

The coldest weather of that winter began to set in as his wife, Marcy, packed her bags and left for her mother’s. Andrew wanted to be manly about it all, but his heart gave a little whimper as her car pulled out of the drive. He couldn’t say how long he had stood looking down the road, his eyes red with the afterimage of her brake lights. Eventually, he wandered into the kitchen, which normally greeted him with the smell of his wife’s freshly baked cakes, bread and all those bubbling pans of delicious food. Now it was quiet, clean and lifeless. He coughed as his heart squeezed with emotion.
Answering the call of nature he hurried into the downstairs washroom. The smell of lemon scented toilet gel danced brightly around the room and he another pang of love for his wife swelled. He reached for the toilet tissue, realising that his hand was flipping an empty cardboard roll instead. He fumbled in the cupboard to find a fresh roll.   Why had he never noticed all those little jobs that Marcy did without mentioning? He wandered into the living room. Their favourite programme was just about to start, but he couldn’t laugh at the comedy because his hollow heart still echoed from her departure. He missed her so much, already.
When eventually he took himself up to bed Andrew stared at the vast, empty divan. In thirty years of marriage they had never slept apart. That night was the longest and coldest he could remember, without the warmth of his wife’s body beside him. In the early days of their marriage they had made love with a passion, but these days neither seemed in the mood.
Two long weeks ensued before Marcy's mother recovered sufficiently from her fall so that Marcy was able to return home. As Marcy entered the house Andrew was there by her side with flowers and chocolates.
“I’ve got something else for you” he said, taking her hand and leading her up stairs.
He nibbled her neck at the top of the landing and slid a hand over her breast. She responded with her mouth hot and eager on his own. They fumbled with each others' clothes, pulling off jumpers and trousers with the eagerness of young lovers, as they stumbled and fell into bed. After a deliciously sweaty climax they lay in each others' arms beneath the duvet.
“Heavens!” Marcy giggled “What brought that on?”
“I guess your absence proved to be a long, cool aphrodisiac!” 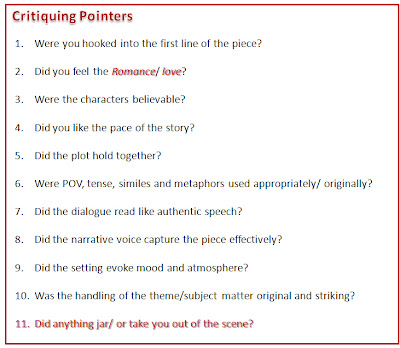 Oh wow! I am Featured Writer this week with Erin Thank you! 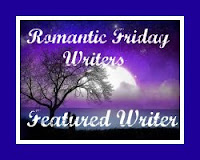 Featured Writer this week. Madeleine Maddocks captured us all with her perfectly-structured flash fiction. As Donna said: 'She told the whole story in one circumstance. There was character and plot growth and a romantically-satisfying ending.'