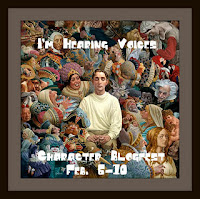 This blogfest is being hosted by: Cassie Mae and Angela Cothran with prizes!
Dialogue Introduction: Have two characters introduce each other using only dialogue—no backstory, no internalisation, just dialogue between the two. Max 250 words

This is a tricky one because producing dialogue without context is pretty much like hearing voices in a white-washed room. However, I've stripped down my piece to the bare bones and eliminated any tags and description, so that you learn everything simply through what is being said and nothing more.

“Come on Caroline. Out with it. What’s on your mind?”
“Why on earth would you think anything particular’s on my mind?”
“Don’t give me that wide-eyed, innocent, all indignant look! That cappuccino needs drinking not stirring for a start. You’ve been staring out the window for the past ten minutes. And I’m pretty sure you’ve no idea what I’ve said, have you?”
“Well you were saying something about work…”
“Just as I thought. Now spill”
“Okay Becky, you’re right. But you’re going to think I’m a terrible person if I tell you.”
“You’ve got to tell me now, before I burst!”
“I met someone and I can’t get him off my mind”
“Well Hallelujah!  It’s about time you found a new daddy for Juliet. How old is she now-nine?”
“Uhhuh. I’ve only met Bernard a couple of times and he doesn’t know about Juliet”
“Bernard, huh? Tell me more. Does he feel the same way?”
“I don’t know. I think so. It’s complicated.”
“Are you sure you’re not just putting up barriers?”
“Not at all. I wish it were more straightforward. He’s considerate, he’s got such kind eyes and he’s handsome. But he’s in an unhappy marriage.”
“Alarm bells are ringing now, honey. Did he tell you that?”
“No he’s extremely loyal and I’ve met his wife. She’s a first class bitch!”
“So you plan to rescue him and live happily ever after?”
“That’s the plan. Now, shall we order some cake?”
“Absolutely! And celebrate your Master Plan with it.” (250 words)

This is an imaginary conversation between one of the MC's in my novel and a friend.
What does it tell you about the characters?
Check out my interview voices #1