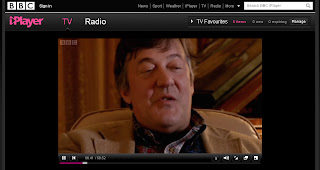 I just caught the last episode of this, but some of you may be able to catch it on BBC iplayer
Stephen Fry makes some great comments and talks to many awe inspiring experts
in the field of English Literature.

My favourite quote from this episode is when he says: ' What distinguishes Shakespeare from all his colleagues, aside from his prodigious output, was his concentration on character often at the expense of plot, which he was content to lift from others'.
It is certainly the characters that hold my interest first and foremost, but naturally if a plot is fairly simplistic and linear it makes for a rather limited story line that fails to stand the test of many re-reads or viewings.

Apparently, Stephen King bases all his characters good and bad on himself!

Which of these do you concentrate on:

Your characters and their agendas?

or the story line?


Nano? No, I've decided not to participate this year. I wanted to say thanks to everyone who gave me the benefit of their own experiences with the process and I did toy with the idea of taking part, but have decided that I must concentrate on my research and reading this year and plan possibly to have a go next year.
Posted by scribbleandedit.blogspot.co.uk at 14:51