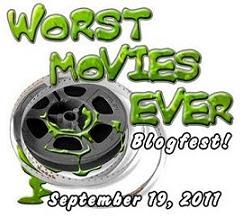 For some inexplicable reason this has posted a week early. Aaargh! As I already have a few comments I will leave it here and refer to it again on the blogfest day.
Blogfest hosted by Alex J Cavanagh
Okay just to say I am sorry if any of my comments offend anyone who loves any of these films, but they just didn't do it for me.

So which will I include here?

The Legend of Boggy Creek. I saw this when I was 10 yrs old at a drive-in movie theatre in Canada. Then I saw it on TV as an adult and it didn't hold up to scruntiny. Even the apparently petrified tracker dogs were happily wagging their tails.

I loathe films that are all action crashing cars, explosions, shooting and no real story and those with a thin uncomplicated story line and those which draw themselves out 'like pulling hens teeth', as my Pa would say.
And who could endure the 1990 version of Lorna Doone starring a very young Clive Owen and a very young Sean Bean? It is full of disjointed scenes which very poorly convey the sentiments of the story.

Remember Me starring Robert Pattinson. Now don't get me wrong I loved him in Twilight and Harry Potter﻿, but this film is seriously depressing and dull.

Then there's Red Riding Hood with Amanda Seyfried and a host of other well known actors.
The best bit was when we discovered who was the wolf. The plot was very thin.

And Atonment with James McAvoy (one of my fav actors) and Keira Knightley (whom I also like). I'm afraid for me the book and the film were as long drawn out as a bad bout of toothache.
The English Patient, at the end of which my hubby exclaimed "And this won seven oscars!" (which pretty much summed up how I felt about it... another bout of toothache) His comment cracked me up!

I am Legend. Again I probably love all of Will Smith's other films, but this one was diabolocal! It had no meat on its bones for me.
Posted by scribbleandedit.blogspot.co.uk at 07:00