This blogfest is running from August 1st - 3rd.
How many works of fiction have you seen BOTH the film/TV drama and read the original book, play or comic story?


I love reading the novels on which films were based and watching the films that a favourite novel has been adapted into, though at times this can be frustrating, oftentimes it is rewarding and sometimes I confess I can prefer the film to the original novel, but sshhh don't tell the author! 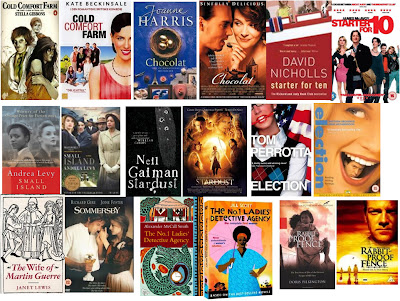 Often the novel contains more insights and backstory than the film. However, I have noticed that the films can sometimes present some aspects more graphically.

Sometimes their choice of actor to play the roles can jar and sometimes they can miss out scenes that lead the audience in a different direction that can be frustrating.

At other times the changes made from novel to film can enrich the stories.

I wish I had not watched Lovely Bones as it was more upsetting and disturbing somehow than when I read the novel. I have read her novel Lucky as well.

I found that The Road film was true to the original novel which presents a typically post -apocalyptic view of depravity, violence and desolation, which made me wonder the point of the story. I'm aware its premise is what lengths will people go to to survive, but it didn't tell me anything I didn't already know, nor particularly leave me with any sense of satisfaction. Had the story been through the eyes of the boy, reflecting back some years after the road journey with his father and showing how this had affected his subsequent survival and development, then it would probably have been really brilliant. (Sorry Milo et al!) I love stories where the protagonist rises above adversity and shows their intelligence and guile. Where often one (or just a few) outwit the many.