Y: Yarns that are good

Hubby and I have just watched 3 televisations of a well known fantasy author's novels, which have sold in their millions and are, therefore, considered really good yarns. However, of the 3 we watched, we concluded that one was absolutely superb, one wasn't bad and the other seemed disappointingly dull.


For me, the best one had action throughout, humour and a good plot, but what made it stand out from the other two, was that it had a more identifiable MC with whom we could relate to and root for from the start. It was called Going Postal. My overall feeling of the other two was of slight confusion, as instead of seeming to following the MC the action kept switching to another set of characters and then another gaggle, making the story seem slightly fragmented. I began to wonder who or what I should be rooting for and I guess because I did not feel strongly enough about the apparent MC's, for one, at least, I just felt bored.

I really loved watching Going Postal. I found The Colour of Magic dramatisation rather dull and Hogfather was amusing, but less engaging than the first. Of course the actual novels may be more engaging.


There was conflict in all 3 of the stories; antagonists and protagonists. However, having a strong MC made all the difference to how enjoyable the yarn.

I intend to get the novels from the library and see whether reading them changes my opinion of the way the yarn is presented.

Have you read stories where the MC was so weak or absent that you lost interest? 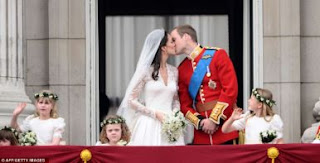 Yay!
What a lovely Royal Wedding and the sun decided not to outshine the bride!
Posted by scribbleandedit.blogspot.co.uk at 06:30