The Poetry Society " wanted to celebrate the society’s centenary with a fun, grand-scale project in which many people could participate, that was about ‘poetry’ but also summoned up the idea of ‘society’, to reflect all the thousands of people who’ve kept the Society going since 1909. The time, commitment and creative skills that people have given to this enterprise has been overwhelming." 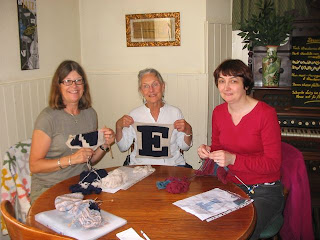 Here I am with 2 ladies from my knitting group, Sally and Penny.
I'm knitting the letter T.
I have yet to see the finished knitted poem.

'Thoughts of a Late-Night Knitter.Had I felt inspired I would have attempted one myself too.

Do you knit? Have you seen the knitted poem?
Check out Hookin Knittin livin blog for a poem

Debbie Macomber has written a series of Blossom Street stories about a yarn shop, which are enjoyable reads.