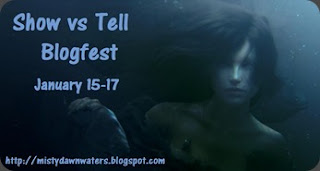 Misty Waters at Writer's Block ~ Oh wait! I mean Blog... is hosting a great show and tell blogfest.
Choose a picture and write two pieces about it, one Telling and one Showing. 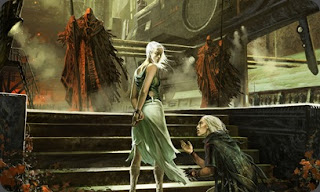 TELLING involves narrative summary. Being told what is happening rather than the reader feeling it for themselves. The author spells everything out, populating the narrative with statements, rather than letting the reader experience it. While it is possible to include some description in the telling, it is fairly stark and factual.


TELLING: Basic narrative summary:
It was hot. The Stythian watched them in the stifling billowing air. Zedric looked up at his wife Aleona and held up his hand beseechingly.
“I had no choice” he said “You made it impossible for me not turn you in, Aleona”
She looked at him with pure hatred. The pumped air making her hair and clothes billow about. Her hands were tied tightly behind her back and she glared at her husband.

“You know I love you, don’t you” Zedric said, holding her gaze.
“You call this love!” she snarled back.

The Stythians moved forward impatiently.
“Your time is up!” their collective voice boomed in one accord. “Come now she-thing.” (111 words)

TELLING with some description:
NB: When I did my OU Creative Writing Course and wrote like the stuff below, my tutor would constantly berate me with 'Show not tell' and I would think 'But I just did!' It is hard to describe a scene without telling what it looks like, which involves some description. I guess the real showing is in making the reader feel it too?

The Stythians  stood waiting at the top of the stairs holding their staffs, their tattered filthy cloaks billowed in the fetid atmosphere of the docking station. Zedric knelt at the bottom of the steps looking up at his beautiful wife. Remorse wracked his features, as fear coursed through his body. His personal feelings conflicted, once again, in his mind with his ultimate duty.


“I had no choice” he pleaded “You made it impossible for me not turn you in, Aleona”  he said holding his hand up to her in a beseeching gesture, such was his need for her forgiveness.


Aleona looked down at her husband with ill-concealed hatred, her hands bound tightly behind her back. Her white-blond hair and silk attire flapped about her in the current of hot air that was being pumped into the atmosphere by the Stythians. It enabled them alone to breathe. Both Zedric and Aleona knew that prolonged exposure choked the life out of normal human souls; the heat and the stench almost suffocating them as they loitered.

“This is the sacrifice you are prepared to make?” Aleona demanded.

He could not answer her, such was his own internal battle. He hoped that once she boarded the Stythian ship she would be safe. He hoped she might have a chance, but he did not know for sure.

“You know I love you, don’t you” he said finally, holding her gaze.

She snorted “You call this love!” The snarl in her voice was answer enough, though not the one he would have wished to hear.

“Your time is up!” their collective voice boomed in one accord. “Come now she-thing.”
(278 words)

SEE SHOWING NEXT.
Posted by scribbleandedit.blogspot.co.uk at 12:49