Just to say a HUGE thank you to everyone who has entertained us with their Through the Keyhole Blogfest entries.
I would like to announce that Dom described my character perfectly from the description I gave: A man in his late fifties / early sixties with his parents' / grand parents' furniture. Poor, but clean and tidy. A bit of an anorak (geeky enthusiast for non-brits!). There are probably train numbers in a notebook in the bedside table! This is a lonely man, few friends. He seems to be living like someone 15 years his senior, so perhaps he had to take early retirement due to ill health.

So well done Dom who gets awarded the key: 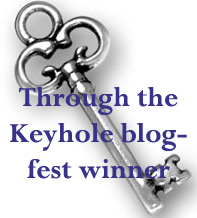 I wonder who managed to guess his character that he will pass it on to...

All those who entered should pass on the key to the person who guessed their entry correctly.
Posted by scribbleandedit.blogspot.co.uk at 09:06